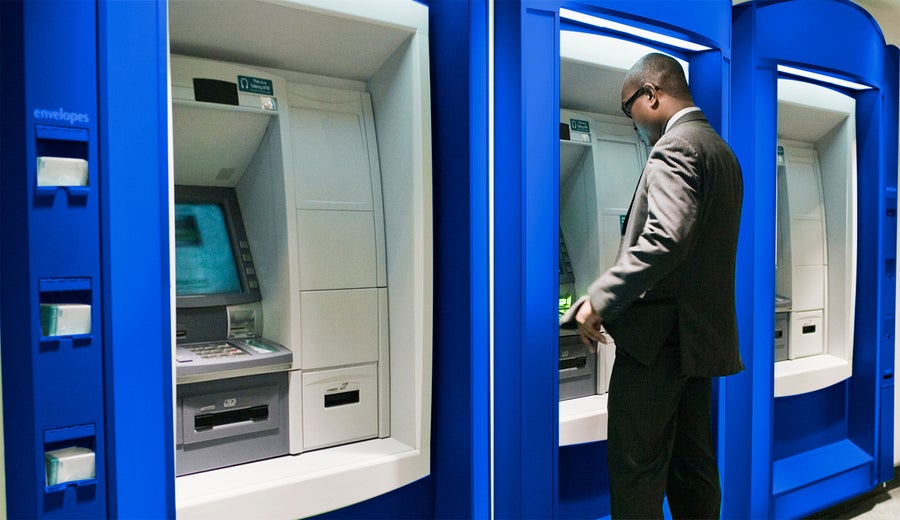 Interest rates have decreased significantly this year with the Federal Reserve lowering rates in response to the coronavirus pandemic.Average yields for interest checking accounts tied a record low of 0.04 percent annual percentage yield (APY), according to Bankrate’s 2020 checking account and ATM fee study.Not only that, the average monthly fee for this type of account and the balance requirement to avoid paying the fee are both at record highs, coming in at $15.50 and $7,550 respectively.When it comes to non-interest accounts, however, average monthly fees hit a six-year low of $5.27 and 47 percent of these types of accounts are free.The average fee for non-sufficient funds (NSF) — the cost of overdrawing a checking account — rose 0.3 percent to $33.47. That’s an increase of 11 cents compared to last year and the highest it’s been in the 23-year history of this annual study.Meanwhile, the total average cost of using out-of-network ATMs decreased slightly, down 8 cents to $4.64. That’s the lowest it’s been since 2016.Bankrate surveyed 10 banks and thrifts in 25 large U.S. markets. We gathered information about interest-bearing and non-interest-bearing checking accounts and details regarding ATM and debit card fee policies. Below are the highlights from our study.Key findings:
Both the average monthly service fee ($15.50) and the average balance required to avoid a fee ($7,550) hit record highs for interest checking accounts.
Nearly half (47 percent) of non-interest checking accounts are free accounts, the highest percentage since 2010. Monthly fees for non-interest checking accounts that charge them decreased by an average of 34 cents.
Average combined ATM fees decreased by 8 cents, to $4.64. Atlanta had the highest fees at $5.60 and Chicago had the lowest at $4.11.
Average overdraft fees hit a record high of $33.47.
Interest checking accounts: Fees up, yields downMany banks charge customers a monthly service fee for going below a certain balance in their checking account. For checking accounts paying interest, the average minimum balance requirement to avoid a fee is usually significantly higher than the amount needed with a non-interest checking account.On average, you’ll need $7,550 to avoid paying a monthly maintenance fee on an interest checking account. That’s the highest it’s ever been in the Bankrate survey’s history, and about a 6 percent increase from last year’s average amount needed to have the fee waived.The average monthly service fee on interest-bearing accounts increased by nearly 3 percent since last year’s survey. The average maintenance fee on a checking account that earns interest is now $15.50 a month.!function(e,t,s,i){var n=”InfogramEmbeds”,o=e.getElementsByTagName(“script”),d=o[0],r=/^http:/.test(e.location)?”http:”:”https:”;if(/^\/{2}/.test(i)&&(i=r+i),window[n]&&window[n].initialized)window[n].process&&window[n].process();else if(!e.getElementById(s)){var a=e.createElement(“script”);a.async=1,a.id=s,a.src=i,d.parentNode.insertBefore(a,d)}}(document,0,”infogram-async”,”//e.infogram.com/js/dist/embed-loader-min.js”);Almost three-quarters of interest accounts (70 percent) require you to keep that balance in either your checking account or at the bank in order to avoid that fee. But direct deposit is a way to waive this fee on 21 percent of these accounts. That’s up from 19 percent last year and 16 percent in 2018.Minimum opening balances are also climbing. The average amount needed to open an interest-bearing checking account skyrocketed since last year — going from around $575 to near $971 in this year’s survey. That’s only about $15 away from the record-high of $986, set in 2007.Non-interest checking: Highest percentage of free accounts since 2010Among non-interest checking accounts, about half (47 percent) are considered free, up 5 percent from last year and the highest percentage since 2010.Of those accounts with monthly fees, the average fee has fallen to a six-year low of $5.27. This is significantly lower than the $15.50 average for interest checking accounts.In addition, customers only need to keep about one-thirteenth of the minimum balance in their account (about $594, on average) compared to interest checking accounts in order to have the fee waived. Direct deposit will waive this fee for 41 percent of these accounts.You also don’t need as much to open a non-interest checking account. The average minimum opening balance decreased by around $7 in the past year to a six-year low of $156.!function(e,t,s,i){var n=”InfogramEmbeds”,o=e.getElementsByTagName(“script”),d=o[0],r=/^http:/.test(e.location)?”http:”:”https:”;if(/^\/{2}/.test(i)&&(i=r+i),window[n]&&window[n].initialized)window[n].process&&window[n].process();else if(!e.getElementById(s)){var a=e.createElement(“script”);a.async=1,a.id=s,a.src=i,d.parentNode.insertBefore(a,d)}}(document,0,”infogram-async”,”//e.infogram.com/js/dist/embed-loader-min.js”);There’s long been this dichotomy between interest and non-interest accounts, says Greg McBride, CFA, Bankrate chief financial analyst.“And it is even more apparent this year with fees and balance requirements on interest accounts hitting new record highs at the same time that among non-interest accounts we’re seeing the most free accounts that we’ve seen in a decade,” McBride says. “And we’ve seen a shift toward lower fees and balance requirements among non-interest accounts.”Free checking became widely available from 2003 to 2009, jumping from 44 percent to 76 percent, McBride says. But regulatory changes and altered economics from record low interest rates changed that. The percentage of free checking accounts fell to 39 percent by 2012 and then hovered in the 36 percent to 42 percent range.ATM fees: Lowest total cost since 2016According to Bankrate’s data, the total cost of the average out-of-network ATM withdrawal is $4.64. That’s the lowest it’s been since 2016 and a decrease of 8 cents in the past year.If you’re using an ATM outside of your bank’s network, expect to get hit with two fees: a surcharge from the owner of the ATM and a fee from your own bank or credit union.ATM surcharges, on average, cost non-customers $3.08, down a penny since last year’s record high. It’s only the second time in the survey’s history that the average ATM surcharge has decreased — with the last coming in 2004. But the average ATM surcharge is still at the second highest amount in the history of Bankrate’s survey.And your bank will still charge you around an average of $1.56 to use someone else’s ATM. This actually fell for the third straight year and is the lowest since 2013.!function(e,t,s,i){var n=”InfogramEmbeds”,o=e.getElementsByTagName(“script”),d=o[0],r=/^http:/.test(e.location)?”http:”:”https:”;if(/^\/{2}/.test(i)&&(i=r+i),window[n]&&window[n].initialized)window[n].process&&window[n].process();else if(!e.getElementById(s)){var a=e.createElement(“script”);a.async=1,a.id=s,a.src=i,d.parentNode.insertBefore(a,d)}}(document,0,”infogram-async”,”//e.infogram.com/js/dist/embed-loader-min.js”);Of course, how much you’re charged at the ATM depends on your location. Those in cities like Atlanta, Tampa and Detroit pay significantly more on average for using out-of-network ATMs than those in Chicago, Los Angeles and Seattle. There’s around a 36 percent difference between the $5.60 average total ATM withdrawal fee in Atlanta compared with the average of $4.11 in Chicago.Highest and lowest ATM fees by metro area

Source: 2020 Bankrate checking account and ATM fee study
But with so many surcharge-free options available, consumers should be able to avoid these fees through large ATM networks and accounts with ATM surcharge reimbursement. These may be limited to a certain amount reimbursed each month.Overdraft charges: NSF fee hits a record highThe cost of overdrawing your checking account hit a new record high this year, increasing to an average of $33.47. The average overdraft NSF fee is 11 cents higher than last year and rose for the twentieth time in the past 22 years.!function(e,t,s,i){var n=”InfogramEmbeds”,o=e.getElementsByTagName(“script”),d=o[0],r=/^http:/.test(e.location)?”http:”:”https:”;if(/^\/{2}/.test(i)&&(i=r+i),window[n]&&window[n].initialized)window[n].process&&window[n].process();else if(!e.getElementById(s)){var a=e.createElement(“script”);a.async=1,a.id=s,a.src=i,d.parentNode.insertBefore(a,d)}}(document,0,”infogram-async”,”//e.infogram.com/js/dist/embed-loader-min.js”);Depending on the bank or credit union you choose, you could pay more for ending up in the red. And it’s possible to get hit with several overdraft charges in a single day.Frustration over hefty overdraft fees has led to legal attempts to ban them in certain circumstances and resulted in the creation of apps and banking alternatives that don’t charge customers for overdrawing their accounts.The overdraft fee varies across the country. For instance, Philadelphia ($35.70), Houston ($35.18) and Baltimore ($35.05) all have average overdraft fees above $35. Meanwhile, Cincinnati ($30.42), San Francisco ($31.44) and St. Louis ($31.60) have the lowest overdraft fees.Here’s how to avoid many of these feesWhile the average total ATM fee decreased by 8 cents this year, these fees are still expensive. That average cost of $4.64 is nearly a quarter of a $20 ATM withdrawal from the bank.But the good news is that fees, in general, are typically fairly easy to bypass.Instead of visiting an out-of-network ATM, for example, you can avoid additional charges by asking for cash back when making a debit card purchase. Looking at accounts offered by credit unions and smaller banks could also work in your favor, since they tend to have more ATMs available than bigger banks, McBride says. These, and online banks, may have nationwide networks that will increase the number of ATMs you can use without a fee.Saving on monthly fees can be done by choosing a free checking account.“Consumers can avoid balance requirements and monthly fees by looking for a free, typically non-interest account,” McBride says. “Without a balance requirement, there is no need to strand extra money in a checking account and that money can be better deployed in an online savings account. Avoid interest checking accounts, with their high balance requirements, high monthly fees, and low yields averaging just 0.04 percent. Nearly 90 percent of non-interest accounts are free or can become free by signing up for direct deposit.”The average overdraft fee ($33.47) is an expensive bank fee. It’s more than double the average monthly service fee on an interest checking account ($15.50) and more than six times the average monthly fee on a non-interest checking account ($5.27).“Avoiding costly overdraft fees requires keeping close tabs on your checking account balance, and specifically the amount available for immediate withdrawal,” McBride says. “But slip-ups occur so put in a line of defense by establishing a link between your checking account and savings account at the same bank so that money is immediately transferred into the checking account to cover any shortfall. An increasing number of fintech companies and neobanks are offering accounts that do not charge overdrafts and are worth considering for those with more than the occasional overdraft.”MethodologyThe survey group consisted of a total of 10 banks and thrifts in each of 25 large U.S. markets; one interest and one non-interest account, as well as their associated ATM and debit card fee policies were surveyed from 245 institutions offering checking accounts; 239 interest and 235 non-interest accounts were surveyed between July 23 to Aug. 19, 2020.Related
Compare: Best checking accounts
Learn more: Checking vs. savings accounts
Do more: Savings calculator

How to request a credit line increase with Wells Fargo

How to save money for a child