Is college worth it? Americans see it as a good investment, Bankrate survey finds 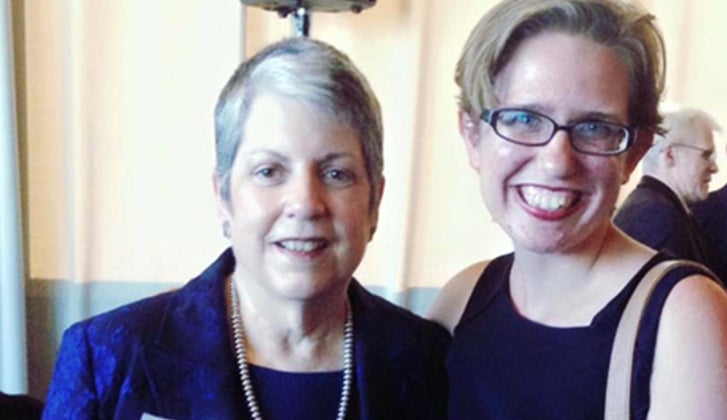 University of California-Riverside sophomore Julia Schemmer (right) with Janet Napolitano, president of the University of California and former secretary of homeland security under President Barack Obama. Photo courtesy of Julia SchemmerCollege graduates overwhelmingly believe a college education is worth the money, a new Bankrate Money Pulse survey finds.Nine in 10 (89%) respondents with a 4-year degree say college was a good investment, the survey shows. That’s even as the costs make a deeper and deeper bite.Julia Schemmer, a 19-year-old sophomore at the University of California-Riverside, says she received financial aid as a freshman, but it wasn’t enough.“During my first year of undergraduate studies, I was fortunate to receive generous aid that covered the cost of my tuition but was faced with the dilemma of having to take out thousands of dollars’ worth of loans just to have a stable sense of food and housing security,” Schemmer says.Bankrate’s survey finds support for one way of making college a lot more affordable: making it free for anyone who wants to attend. We’ve also found resistance toward the idea of allowing consumers to wipe away college debt more easily.Opinion of college value depends on ageGenerally, the older the graduate, the more likely that he or she will say college was a good investment. About a fifth of the younger millennial grads (21%) say college was not worth it, more than any other age group. But a whopping 97% of degree holders 65 or older say it was a good investment, the survey shows.“I am on the side that thinks college is a good investment, but like any investment is, (if) you overpay for it, you will not be happy with the return from it. I think the high millennial response stems from the hope and promise that newly minted graduates have about their future,” says Joe Orsolini, a CFP professional with College Aid Planners in Glen Ellyn, Illinois.Among all Americans, including those who didn’t attend college, three-quarters (73%) say college is worthwhile. In that group is a solid 88% of younger millennials, ages 18-25. On the flip side, only 1 out of 5 of the overall respondents say college is a bad investment.RATE SEARCH: Are you saving for college? Check out the savings rates today at Bankrate.com .Should college be free?On another survey question, 62% of all Americans support making tuition to public colleges and universities free to anyone who wants to attend, with millennials most in favor, at a hefty 77%.“Millennials, as the generation most impacted by skyrocketing tuition prices, see free college tuition as an important part of the changes in American society they plan to make now that more than 1 out of 3 adult Americans are from their generation,” says Morley Winograd, president and CEO of the Campaign for Free College Tuition.According to the College Board, tuition and fees have jumped each year for the past decade. The average at an in-state, public college was $9,410 during the past academic year.But Orsolini says people who like the idea of free college probably haven’t thought it through.“I don’t think the product will be the same as it is today,” he says. “A lot of choices and options that people are used to in the current system will go out the window.”RATE SEARCH: Are you saving money for retirement? Check out the CD rates today at Bankrate.com .Democrats vs. Republicans on free tuitionYou might be able to guess how a person feels about free tuition if you know their political persuasion. Democrats (81%) and independents (67%) support the concept much more than those who identify themselves Republicans (33%).The issue recently came to the forefront when Democratic presidential nominee Hillary Clinton proposed that families with income up to $85,000 pay no tuition at in-state, 4-year public colleges and universities. The income ceiling would rise to $125,000 by 2021.About a quarter of those who oppose free college say they’d be OK with making tuition free for families earning $50,000 a year or less.Republican nominee Donald Trump says he would offer relief by restructuring student debt to make it “very affordable.” He has given no specifics.RATE SEARCH: Do you have enough money for college? apply for a student loan today at Bankrate.com .Americans say: Pay off your student loans!One of the most surprising results in the Bankrate survey is that 40% of respondents say a person with student debt should be required to make payments until it’s paid off. That includes about a third of millennials, and more than half of older boomers (53%).“People who have already paid off their student loans tend to be opposed to loan forgiveness for current students,” says Mark Kantrowitz, publisher and vice president of strategy for the financial aid website Cappex.Even so, more than a third (35%) of Americans say student debt should be forgiven after 10 years of steady payments, and that includes 37% of millennials and 39% of Gen Xers who still may have student loans outstanding.“Ten years in debt is reasonable. More than 10 years in debt risks interfering with the next generation, making parents less likely to save and less willing to borrow for their children’s college education,” Kantrowitz says.Bankrate’s Money Pulse survey was conducted July 21-24, 2016, by Princeton Survey Research Associates International with a nationally representative sample of 1,000 adults living in the continental U.S. Telephone interviews were conducted in English and Spanish by landline (500) and cellphone (500, including 278 without a landline phone).Statistical results are weighted to correct known demographic discrepancies. The margin of sampling error is plus or minus 4 age points for the complete set of data.
Related Links:

FAFSA tips to get more financial aid for college

How to avoid the stranglehold of too much student loan debt

The 10 states with the most personal loan debt