What will happen to stocks if the government shuts down? 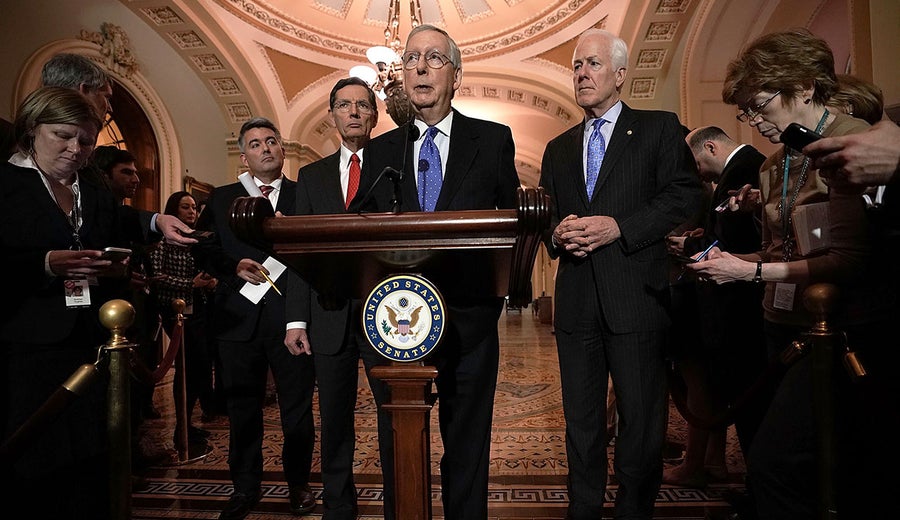 There’s a strange dynamic afoot: stocks ascend to new heights as the federal government barrels toward shutdown. That makes handicapping the impact a turbulent start to 2018 will have on your investments rather difficult.

President Donald Trump’s administration continues to tout the record levels of stock indexes, as well as recent passage of a massive tax overhaul plan, as evidence of his administration’s success. Solid economic growth, combined with an ever-tightening labor market, only boosts his case.

However, with the future of the Children’s Health Insurance Program (CHIP) and the Deferred Action for Childhood Arrivals (DACA) policies uncertain, the odds that the White House and Congress will pass either a short-term spending bill or adopt a real budget only get longer.

What happens to Wall Street’s animal spirits, and your pocketbook, then?

Investors initially panicked as the 2016 election results came into focus, but then swiftly went on a buying spree in the following months as they bet on tax cuts, infrastructure spending and a regulatory roll-back.

There have been blips along the way, but the past year has offered a very nice return on investment. The S&P 500 has gained 26.1 percent over the past 12 months, including a 5 percent jump since the new year. Bonds have chipped in another 3.5 percent, while inflation has recently begun to perk up.

The narrative, though, shifts constantly. Breaking news, like the president’s controversial response to Charlottesville or another North Korea missile test, sends stocks tanking just before they quickly rise again.

If the government shuts down, will that change how investors respond to the dysfunction in Washington?

What does a shutdown mean for you?

LPL Financial looked how equities responded to the past 18 shutdowns and found that stocks fell 56 percent of the time, with an average decline of 0.6 percent.

There is broad agreement that shutdowns are irresponsible and that both parties should find a way to fund the federal government without them, but a decline of less than 1 percent hardly represents a catastrophe. After all, remember June 29, 2017? No? Well the S&P 500 fell 0.9 percent, driven mostly by a sell-off in tech stocks. Life goes on.

Ghosts of shutdowns past

Equities lost more than they gained during past legislative standoffs, and investors may be more disgusted by Washington this time around.

A more apt comparison may be to the 1979 shutdown, when one party — the Democrats — helmed both houses of Congress and the White House, during the Carter administration. That time, stocks dropped 4.4 percent over 11 days. Are you mentally prepared for a decline of that size?

A shutdown might spook markets more this time since it would signal that the government may not be able to raise the debt ceiling come March. A failure to allow the Treasury to pay its I.O.U.s would represent an unprecedented fiscal calamity.

Even if there’s a new budget and the debt ceiling is ultimately raised, investors’ starry eyes for Trump may dim. Malaise could set in.

The market has responded to the Trump maelstrom with equanimity. This winter may be when its Zen changes to fear, or even ennui.

What should you do to prepare for a shutdown?

Unless you happen to be a political power player in D.C., there isn’t much you can do.

While you know that you shouldn’t let news headlines affect your risk tolerance, sometimes it’s just really hard to keep those emotions in check.

One study, “Political Climate, Optimism, and Investment Decisions,” found that investors whose political party is out of power — the Democrats now — are more likely to trade frequently, thus causing their performance to lag. Reminder: You are not smarter than the market.

Recognize your limits, and create a system that allows you to satisfy your itch to do something without derailing your financial plan. One option is to dedicate, say, 3 to 5 percent of your portfolio to active management.

While most of your assets are generally better off in diversified, low-cost mutual and exchange-traded funds, allowing yourself to pick winners and losers with a small sliver of your assets may prevent you from making more drastic decisions.

Try not to get carried away, though, if you happen to correctly guess which ways the winds will blow.

Table: The rise in auto loans across the US