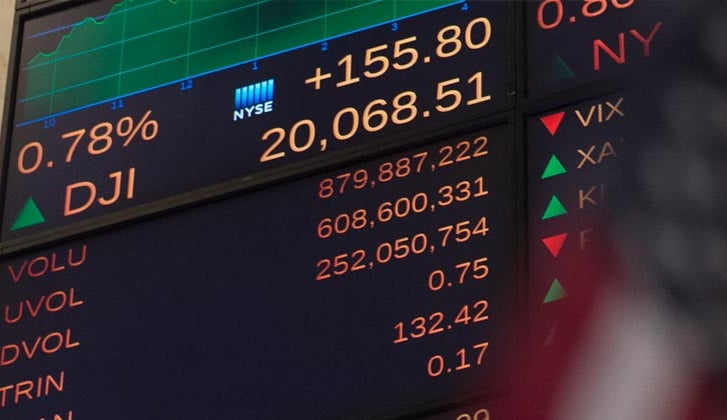 Session ID: 2020-12-02:6259bba0facecd998d561e2a Player Element ID: vjs_video_3
OK
Close Modal DialogBeginning of dialog window. Escape will cancel and close the window.TextColorWhiteBlackRedGreenBlueYellowMagentaCyanTransparencyOpaqueSemi-TransparentBackgroundColorBlackWhiteRedGreenBlueYellowMagentaCyanTransparencyOpaqueSemi-TransparentTransparentWindowColorBlackWhiteRedGreenBlueYellowMagentaCyanTransparencyTransparentSemi-TransparentOpaqueFont Size50%75%100%125%150%175%200%300%400%Text Edge StyleNoneRaisedDepressedUniformDropshadowFont FamilyProportional Sans-SerifMonospace Sans-SerifProportional SerifMonospace SerifCasualScriptSmall CapsReset restore all settings to the default valuesDoneClose Modal DialogEnd of dialog window.Close Modal DialogThis is a modal window. This modal can be closed by pressing the Escape key or activating the close button.
The Dow has crossed 20,000 for the first time, so let the hysteria begin.Everybody loves the round numbers, so this is something that gets a lot of play, but from a significance standpoint, it doesn’t mean a whole lot.The S&P 500, the NASDAQ: they both closed at record highs yesterday; it barely got a mention. And that’s far more significant, because those are indices that are much broader and much more representative of the market at large.The problem with the Dow is, it’s like the Queen of England: it’s a figurehead. It really doesn’t mean a whole lot. It’s what’s called a price-weighted index, meaning that the price of the stock carries an outsized weighting on the movement of the index, rather than the value of the company. So, a broader index like the S&P 500 — which includes 500 companies — it’s valued based on the value of the companies in that index and it moves up and down as the value of the companies change.In the Dow, it’s all about the movement in the price of the stock. I’ve got to give credit to Mitch Zacks from Zacks Investment Research on this; he did a great job of breaking this down. But basically, you take two of the stocks that are in the Dow as examples.Travelers, the insurance company with the red umbrella, and GE, the company that makes all of our lightbulbs (among other things). Travelers has a stock price that’s about four times higher than that of GE. So, in terms of the Dow, Travelers has four times the impact of GE on the Dow.The problem is, when you look at the value of the companies, GE is eight times the size of travelers … eight times the size, yet they only have 25 percent of the impact that Travelers does on the index.So again, the Dow 20,000 is going to get a lot of attention because it’s a round number, but look, the Queen of England turned 90 last year. That was a round number. Neither one of them mean a thing, so if you want to get a better gauge on what’s happening with the market and where the market’s going, look at a broader index, look at one that’s based on market capitalization: actual value of companies like the S&P 500.The Dow is just a relic, a figurehead, but people love their round numbers. What’s far more significant are the movements in broad-based indexes, like the S&P 500 — closed at a record high yesterday, but the number 2,280 just doesn’t have the same ring as 20,000, so therefore, it didn’t really get much of a mention. But that’s the number, and that’s the index that’s far more significant.
Related Links:

How a Trump presidency affects you

Watch how a Trump presidency affects you