An investing lesson — from Cubs fans 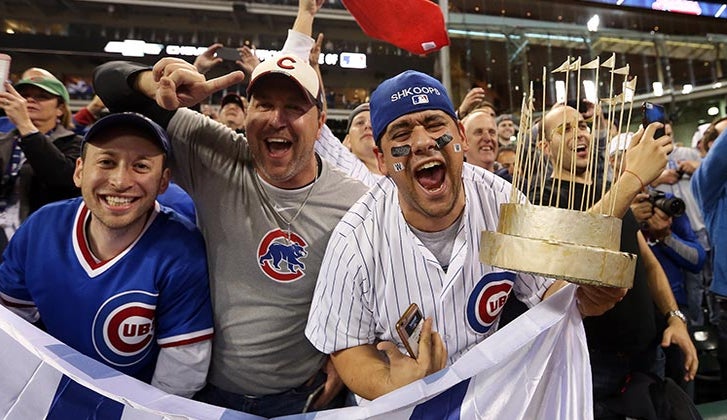 In case you haven’t heard (and that’s actually impressive if you haven’t), the Chicago Cubs have won the World Series.

Make that: THE CHICAGO CUBS HAVE ACTUALLY WON THE WORLD SERIES!

They captured their first World Series title since 1908 after battling for seven games against the Cleveland Indians, who last won the World Series in 1948.

RATE SEARCH: Need a credit card for the next time you need tickets to a big game? Bankrate.com can help.

Last month, when the Cubs clinched their first World Series berth since 1945, I was in Las Vegas, watching the game with friends. Needless to say, there was celebration.

I wonder how my great-grandparents celebrated the Cubs’ last World Series title? And what about the Indians fans in 1948? What if they celebrated smarter than me? What if they took out $100 (yeah, $100 … we’ll say that’s how little I spent) and invested it in the Dow Jones industrial average stocks in honor of a championship?

Maybe if they had done that, I could have been able to afford a ticket to a World Series game this year. (And, by the way, tickets to the 1908 World Series were just a bit cheaper).

My family is full of die-hard Cubs fans. My mom is a bigger fan than I am. My late grandfather listened to and later watched every game. (Thank you, WGN and the late, great Harry Caray!) Of my top 10 fondest memories as a kid, I’ll bet half of them are Wrigley Field trips.

Over the years, the Cubs have taught me something very important, which is good for investors to remember, too.

If you want a big prize, sometimes you have to be very, very — very! — patient.

Is the market headed for an election correction?